In Turbocharge Your Talent, Vasile Beluska makes his case for his belief that talent is available to anyone. There are no “secrets” per se; many factors have to converge to become talented in any field.

The book can be read as a novel, start to finish, but it becomes technical in the second half which is dedicated to string instruments, particularly the violin. Professor Beluska prefers to use his book as a reference tool. By simply reviewing the list of “Laws” at the end of the book, the reader is directed to find explanations for issues in talent development and, later in the book, specific string instrument techniques.

There are short, personal stories throughout, to illustrate points and to give a different perspective.

“Vasile presents his philosophy that all people are talented, not only those who play the violin. His comparison between learning a language and learning to play the violin makes great sense… When my sons began playing the violin, I had no idea that they were exceptionally talented. Both Zach and his brother, Jason, were quite young when they started studying with Vasile. After they became adults, both of them were accepted by the Curtis Institute of Music in Philadelphia. From there, they entered the Philadelphia Orchestra’s first violin section. Later, Zach became the concertmaster of the Indianapolis Symphony and a founding member of the famous trio, Time for Three… Everything Vasile taught my sons is available in this easy to follow and humorous book. More than just music is to be learned therein; Vasile’s instruction is unique.”
Wallace De Pue, Sr. 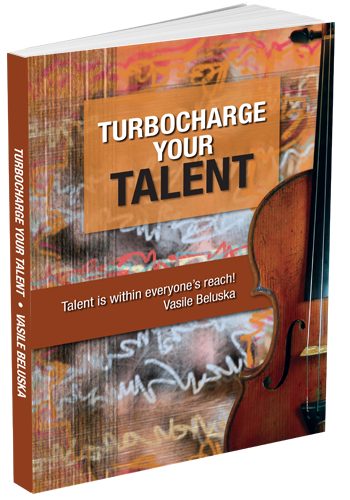